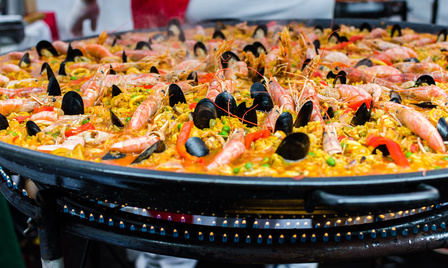 My passion for paella started early in my childhood. There were, of course, trials and tribulations related to this subject, but all-in-all, the positive memories outweigh the negative ones. As a matter of fact, the positive ones would never have emerged if it hadn’t been for the more unfortunate ones. How’s that for calling the glass half full, instead of half empty?
As a small child, I was always in the kitchen helping out my mother, and it was not before long that I was preparing things myself despite my young age. Additionally, our family traveled extensively throughout Europe as my father’s job required frequent trips abroad, and our family, including me, tagged along with him. These trips also influenced me immensely with regard to food and my love of guessing how to cook things we ate.

During one trip to Spain, we were presented with a wonderful meal that I will never forget as long as I live; it was paella. I thought it was the most perfect dish, ever: not too much meat, not too much starchy carbs, not too many vegetables, but rather, it was an impeccably balanced blend of rice, seafood, chorizo sausage, peppers, onions and other vegetables, all perfectly bathing in a spice I tasted for the first time: saffron. It was heavenly.

Once back home, I immediately tried to reproduce this culinary experience by making paella myself, but I did not prepare it correctly. Instead of using the right equipment, I used what we had at hand. It wasn’t a complete disaster but I wouldn’t call it a success, either. Not too long after this defeat, I learned that I need to cook Paella with a specific pan and a paella burner, which allows for even cooking in a large flat pan. I learned to find the optimal order of cooking all the ingredients, the correct amount of spices and chicken stock. Once I created what I thought was a perfect paella recipe and learned how to prepare everything, including working the regulating controls on various paella burners, which is important, slowly but surely, I eventually prepared a paella, that my guests continuously rave about. You could say I’ve given them their own paella memories!